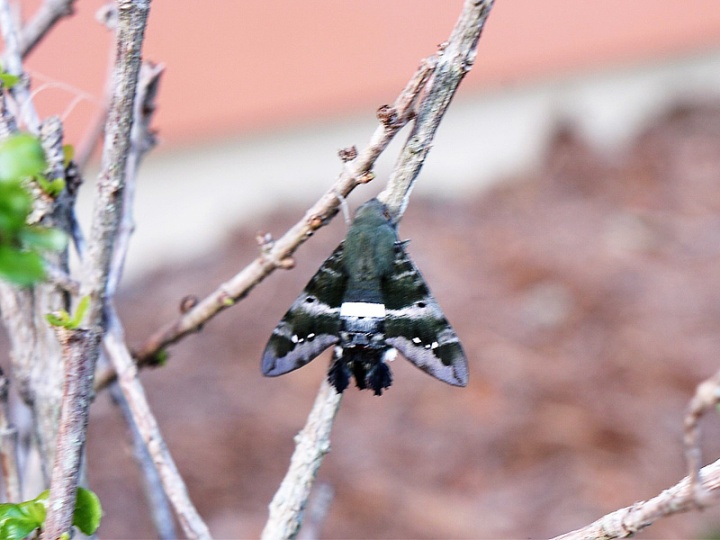 When the ORCA volunteer work crew arrived to work on Sunday morning, they were treated to a sighting of this Tantalus Sphinx moth (Aellopos tantalus).  It was posing on one of the native landscape plants in front of the building, White Indigo Berry (Randia aculeata).   The plant actually was the key to the moth identification with results from a google search “White Indigo Berry Month”.

Sphinx moths, often called Hawk moths, belong the order of insects named Lepidoptera (butterflies and moths) and to the family Sphingidea of which there are nearly 1500 species.  If you have ever raised tomatoes with leaves eaten by Tomato Horn Worms, you have encountered the larval stage of a Sphinx moth.  The Tantalus Hawk is diurnal (day time) and nectars on flowers exactly like Hummingbirds.  Many species in the family are called Hummingbird Hawk moths and look, fly, and even buzz like hummingbirds.  We have observed them nectaring in our butterfly garden.

We theorize that this adult month was posing on its host plant, not to lay eggs but rather as a new emergent from its nearby, hidden in leaf litter, pupal stage.  The individual plant this was observed on had been severely defoliated, most likely by this moth in its larval stage.

The white band was very striking and stood out from a considerable distance.  One entomologist has speculated that this white marking is UV reflective and possibly related to attracting mates.

We will be looking for eaten leaves and larvae on our many White Indigo Berry’s that are now thriving in our formal front landscape.